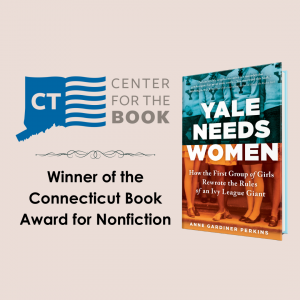 The news was so shocking that the New York Times ran it on the front page.

Yale, which had banned women undergraduates for the previous 268 years, was finally going coed. And yet, had Yale President Kingman Brewster had his way, Yale would never have admitted women at all.

Yale Needs Women tells for the first time the true story of the women who broke the gender barrier at Yale College in 1969, and follows five women students in particular—two Black and three White—through the tumultuous early years of coeducation.

Anne Gardiner Perkins’s unflinching account of a group of young women striving for change is an inspiring story of strength, resilience, and courage that continues to resonate today.

“It was one thing to let women in the door; it was quite another to make them feel welcome, integrated and equally represented in Yale’s deeply entrenched male culture … In absorbing detail, Perkins describes the organizing efforts of those early years, from a protest by freshman women at an alumni lunch to the creation of advocacy groups like Women and Men for a Better Yale.”         See full review here.

“This stunning, engaging work highlights the strength and courage of women who fought for their future against centuries of patriarchy. Perfect for readers interested in seeing how far women have come–and how far they still have yet to go.”         See full review here.

“Perkins has delivered an engaging and surprising story that illustrates the challenges college women have confronted across the country. Her narrative made this recent college grad feel grateful to the women who came before her.”         See full review here.

“Coinciding with the 50th anniversary of the first undergraduate women admitted to Yale, Perkins’s account of how these women transformed Yale’s “village of men” to a coeducational university is an absorbing read.”                         See full review here.

“Yale Needs Women breaks through the male stronghold that once defined the Ivy League and delivers the powerful history of a group of young women bold enough to reshape undergraduate education. Perkins’ richly detailed narrative is a reminder that gender equity has never come easily, but instead is borne from the exertions of those who precede us. You must read this book: not only to understand our past but to glean critical insight into the future of our academic institutions.”

“Yale Needs Women is a riveting and uplifting account of the experiences of Yale’s early women coeds—first admitted in 1969.  It reveals the multiple barriers faced by these pioneers, as it chronicles their brave efforts to overcome them. Thanks to these champions of women’s rights, with similar efforts across the country, opportunities for women have improved. The fight is not over. This inspiring book is a “must read” for everyone.”

U.S. Secretary of the Treasury

“Just in time for the 50th anniversary of the first class of women to enter Yale College, the author’s own alma mater, Anne Gardiner Perkins has written an enjoyable and lively history of this event. Through extensive archival research and in-depth interviews with forty-two of the women who matriculated in 1969, Perkins focuses on the experiences of five of these women, recounting both their struggles and their triumphs as they encountered this bastion of male privilege. This beautifully written history also provides a comprehensive view of the many social and political changes that faced the young college women of this era as well as pointing out contemporary problems on college campuses. Yale Needs Women is an important addition to feminist history.”

Harvard University Professor and Host of PBS’s Finding Your Roots

“Perkins tackles the discrimination these brave young women of Yale faced, the tremendous sexism and racism of the time, with stories that will make this #METOO generation shudder and rage. But amidst these darker moments are the stories of women who shined, who triumphed, who took this opportunity for all that it was worth and showed Yale–and the rest of the country–that women of all backgrounds possess the intellectual rigor and leadership qualities required to deserve a place at this Ivy League institution.”

Author of Consent on Campus

“Yes, Yale needed women but it didn’t really want them. From the moment they arrived in 1969, the first coeds faced a male administration and culture that regarded them as sexual objects, isolated them and offered few female mentors. In her compelling account of the tumultuous early years, Anne Gardiner Perkins tells how these young women met the challenge with courage and tenacity and forever changed Yale and its chauvinistic motto of graduating 1,000 male leaders every year.”

Author of The Good Girls Revolt

“Based on extensive interviews and archival research, Anne Gardiner Perkins weaves a tale of courage in the face of arrogance, frustration giving way to hard-won triumphs, and the redeeming power of shared visions and friendships. Perkins makes the story of these early and unwitting feminist pioneers come alive against the backdrop of the contemporaneous civil rights and anti-war movements of the 1970s, and offers observations that remain eerily relevant on U.S. campuses today.”

bestselling author of the Fiske Guide to Colleges 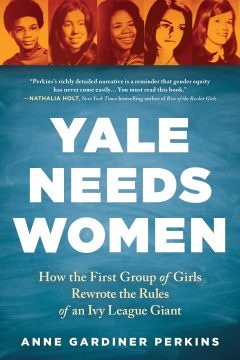